Last week, I gave a talk at the Computer Science Department at the University of Washington in Seattle. I often give talks at partner universities, but this one was special. It was the inaugural talk in the Ben Taskar Memorial Lecture Series, a series honoring my former PhD student, Ben Taskar, who tragically passed away in 2013 at the age of 36. Ben was an incredibly talented researcher, who made hugely significant innovations in machine learning that still have impact today. At the same time, he was a kind, humble, and generous human being, always willing to help others.

Ben left behind a wife and 2-year-old daughter, Aviv, who was born with spinal muscular atrophy – a severe disability that makes her unable to control the motion of her limbs. She now communicates (slowly) with the help of a tablet that tracks her gaze.

Aviv’s story reminded me of the poignant story of one of our own Coursera learners. This is the story of Jerry Vickers. I first learned of Jerry’s story via an email from his wife, Donna. The subject of the email was “Coursera program has changed my husband’s life – He has ALS.” When we called Donna, she shared with us Jerry’s story:

One day in the summer of 2010, Jerry came home from his job at a tech call center with a cough. He thought it was just a cold, but after a month with no improvement, he and his wife Donna went to see a doctor. Three months later, a neurologist confirmed that Jerry had Lou Gehrig’s Disease (ALS) – the slow deterioration of one’s muscles. ALS claims the body slowly – initial symptoms are as subtle as tripping more than normal, or feeling arthritic pains in the wrist while playing tennis. There is no cure, and death is inevitable.

In 2014, Jerry lost the ability to walk and became wheelchair bound. Although Jerry couldn’t work and had physical limitations, his mind was as sharp as ever. Jerry began relying on Coursera to provide motivation and intellectual stimulation in his daily life. Jerry eventually lost feeling in both hands and completed coursework with just one finger. In July 2014, Jerry became completely paralyzed save for his eyes (locked-in syndrome). Like Aviv, Jerry relied on a tablet device with an eye-tracking camera, to communicate with the world, including taking Coursera courses. 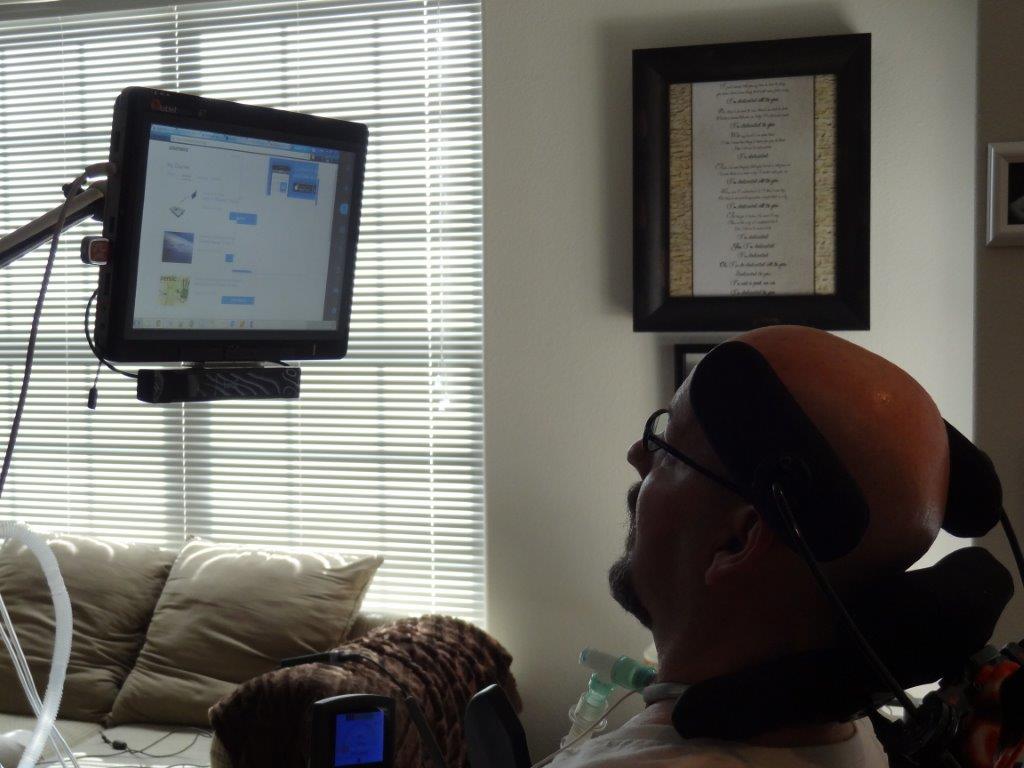 Jerry in his home.

When we spoke with Jerry and Donna on the phone, Donna did most of the talking, but Jerry listened and interjected occasionally with the help of Tobii, his eye tracking tablet. When asked what he thought was the biggest impact of Coursera on his life, he said it gave him confidence. Donna added: “Most people diagnosed with ALS get 18 months to live. They go home and fret, regret the things they have not done. But not Jerry. Coursera has inspired him. He stays up late into the night studying for tests instead of thinking about death. He is determined to continue his education. Our living room walls are papered with his certificates showing his high marks – he consistently gets scores of 98.6%, and has even gotten a few perfect marks.”

There are plenty of excuses to not finish a course: too much work, too busy, too tired. Jerry’s determination to complete new, difficult courses in topics like Data Science and Python with just his eyes should be an inspiration to us all. Despite the most difficult limitations, Jerry’s optimism and determination to learn prevailed and allowed him to take on a second life through learning. Jerry sadly passed away in August of 2015, after a long battle with ALS. It was a privilege to talk with him, even if briefly, before his death.

Our vision at Coursera is to provide everyone, no matter their circumstances, the opportunity to transform their lives through access to education from the greatest teachers at the best universities. We are honored to provide people like Jerry (and we hope also Aviv when she’s older) the opportunity to learn.