Coursera was founded on the belief that education can help anyone, anywhere improve their career and life outcomes. We strive to enable global, inclusive access to high-quality education – especially for those who have historically been underrepresented in university classrooms. In honor of International Women’s Day on March 8th, we’re thinking in particular about how we can support and encourage female learners in fields traditionally dominated by men.

Only 28 percent of graduates from U.S. STEM (science, technology, engineering, and mathematics) degree programs are female; given that almost 75 percent of high school-aged girls say they’re interested in STEM topics, this representation seems woefully low. On Coursera, 34 percent of our course completions in STEM fields are by females — substantially higher than the share of STEM degree graduates, but still far from full parity.

We’ve considered a number of potential approaches to better support women in STEM subjects on our platform. Should we anonymize peer grading? Make messaging more gender neutral? Source more content from female instructors? All of these strategies might have merit, but to understand which to pursue first, we need to test some targeted hypotheses.

One hypothesis is that seeing other women succeed in STEM could encourage female learners and help close the gap. For example, could having more female STEM professors on the platform increase the number of women who take up STEM courses?

We recently tested just that, by sending some of our learners a few different versions of a promotional email about a Specialization that has both a male and a female instructor (of similar professional and academic backgrounds). The email included general information about the Specialization, and encouraged learners to enroll. Learners were randomly assigned to receive a version of the email featuring either the male or the female instructor; they were also randomly assigned to whether there was no information about instructor gender in the email, or whether instructor gender was highlighted. This variation allowed us to understand how instructor gender affects enrollment rates. 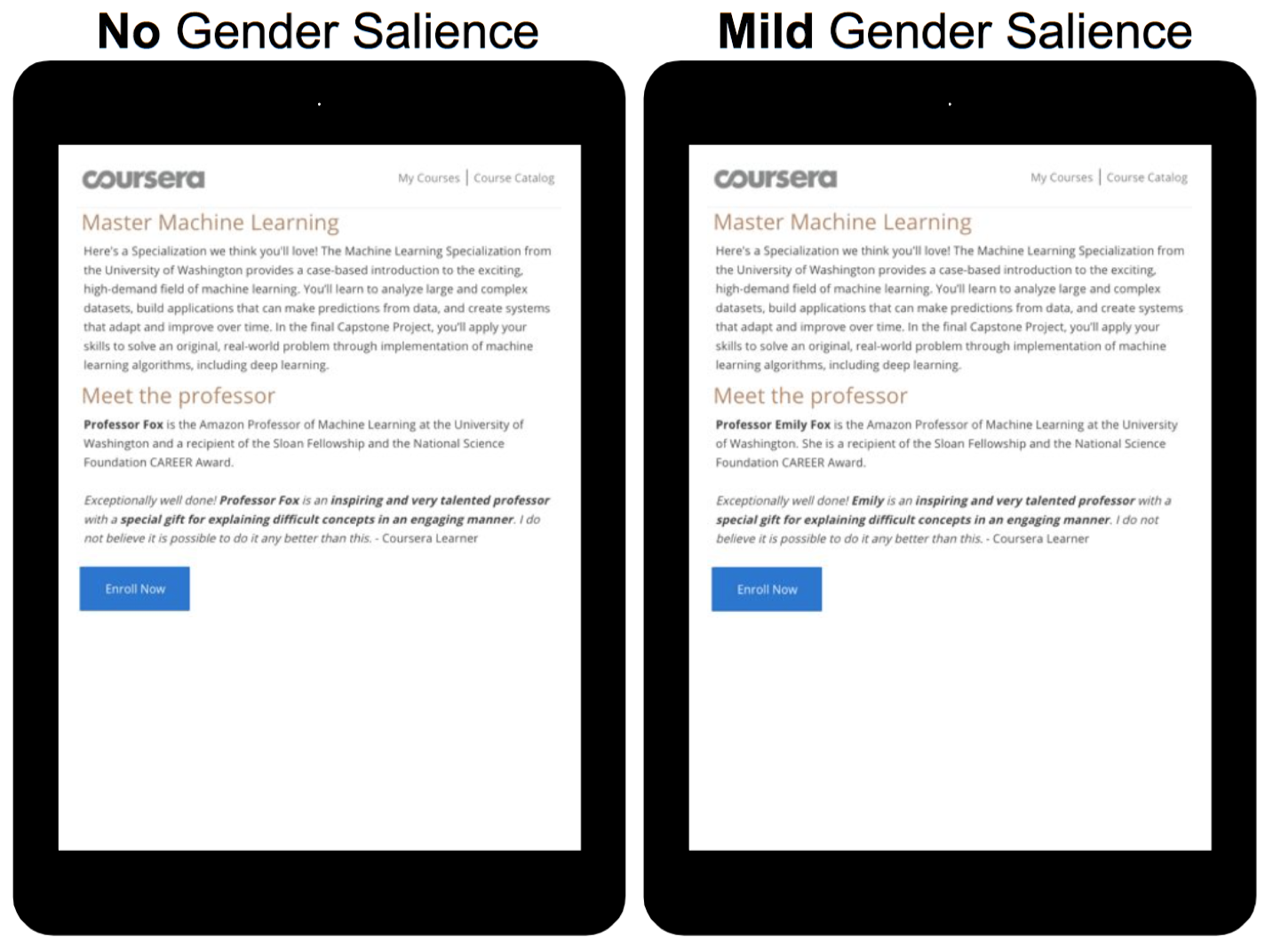 Where do we go from here? We are actively making improvements on the Coursera platform to attract more women to STEM learning content. This includes sourcing female instructors to develop and teach STEM courses, minimizing gendered pronouns in descriptions of courses and Specializations, and working with all instructors to create more accessible and inclusive learning experiences.

We’re also continuing to engage our learner community in helping us foster an inclusive learning environment. As an example, we are currently beta test courses before they publicly launch, putting them through a rigorous review process with actual learners. Beta testers often point out language that is potentially biased to a particular gender, culture, or region, and their feedback gives us an opportunity to work with the instructor to make changes before the course launches.

The gender gap in STEM is a huge challenge that no one organization can solve alone. At Coursera, we are committed to continuing to pursue research and product innovations that make people of all backgrounds feel included and motivated to reach their goals.